What is the corrosion ?

Corrosion is the loss of metallic properties as a result of wearing metal or metal alloys by oxidation or other chemical influences, which can lead to irreversible damage to the steel building material unless a preventive action is taken. Corrosion, which starts to occur at the points where the protective coating weakens and / or tears on metal surfaces, continues to spread under the coating.

WHAT ARE THE FACTORS ACCELERATING CORROSION?

The corrosion of a metal is directly related to its structure and environmental conditions.

HOW CAN CORROSION BE PREVENTED?

There are 3 generally known methods of protection for corrosion protection coatings;
1.Barrier Protection; It blocks moisture, oxygen and other chemicals from the surface. The barrier coatings have a relatively low moisture permeability. THIS IS NOT ENOUGH.

2. Inhibitors; It contains special pigments that interfere with and inhibit corrosive reactions on the surface. As moisture passes through the coating film, the anti-corrosive pigments slowly dissolve to help stop corrosion.

Corrosion is the main cause of unexpected destruction of metallic structures and can cause serious costs.

Corrosion can be prevented with;

• Right Product Selection
• Successful Application
•  Regular Tracking. The life of the building and construction material can be extended.

WHAT IS THE RIGHT PRODUCT?

Direct-On-Rust Paint …
Rust / Corrosion Control from the United States Patent and Trademark Office
Only one Product with Two Patents …
Awarded by the United States General Services Administration (GSA) for a Tariff Contract in Quality Products Literature. Dehumidifier means drying using natural elements of the atmosphere. No external heat source, no additional activator or component is required.

It is an Aromatic Urethane with Aliphatic Properties …

The overlapping aluminum flakes in the formulation provide superior strength, durability and adhesion strength than aluminum powders. This makes the product more successful than other aluminum containing product groups.

Rust Bullet has a solids content of 70% (+/- 2%). The high solids content means the low solvent content that evaporates during drying. In other words, when applied to the surface, more than 70% remains on the surface. This makes it an environmentally friendly and safe product when evaluated in terms of combustion and health risk. Flame spread index zero (0) & Smoke spread index five (5)

RUST BULLET is a mold concealer.

It has superior adhesion …

Optimum Performance in Any Environment …

How does it protect surfaces?

Permanently stops rust and corrosion. Instead of forming a film on the applied rusted area, it enters the pores on the surface and allows the affected rusted areas to dry. This method dehydrates the affected areas. It then forms a solid coating barrier to prevent future rust and corrosion. It becomes an integral part of the surface and protects the surface. UV-resistant, no overcoating is required. Metallic gray.
Provides a porous and impermeable barrier protection.

Contains special pigments to inhibit corrosion
It is an aluminum-rich coating that protects the surface and sacrifices itself over time.

Leading products on the market were used for comparison. The potential performance of the coating and / or system against scratch-friction etc. on each test panel was tested on the basis of ASTM standards.

X-shaped scratches were made on the test panels and rust formation and propagation in these areas were observed. and Differences Between Other Corrosion Paints;

Accelerated corrosion testing has also shown that there are significant differences in corrosion protection between RUST BULLET and Normal Dyes (such as epoxy, polyurethane, etc.);
• Surface preparation and cleaning is minimal for RUST BULLET application. With simple hand tools, it is sufficient to remove the paint layer and free corrosion, if any. Corrosion does not need to be cleaned. No sandblasting required.
Low Cost ….. Easy Application ….
However, in normal paint applications, the old paint layers and the corrosion layer, if any, must be removed by sandblasting and a certain SA degree must be achieved. Differences Between Other Corrosion Paints of RUST BULLET Application;

• RUST BULLET does not require primer. It is applied directly to surfaces. Differences Between Other Corrosion Paints of RUST BULLET Application;

RUST BULLET Protection
Since normal paints only operate with barrier protection logic, they will spread under the rust paint layer and other areas. 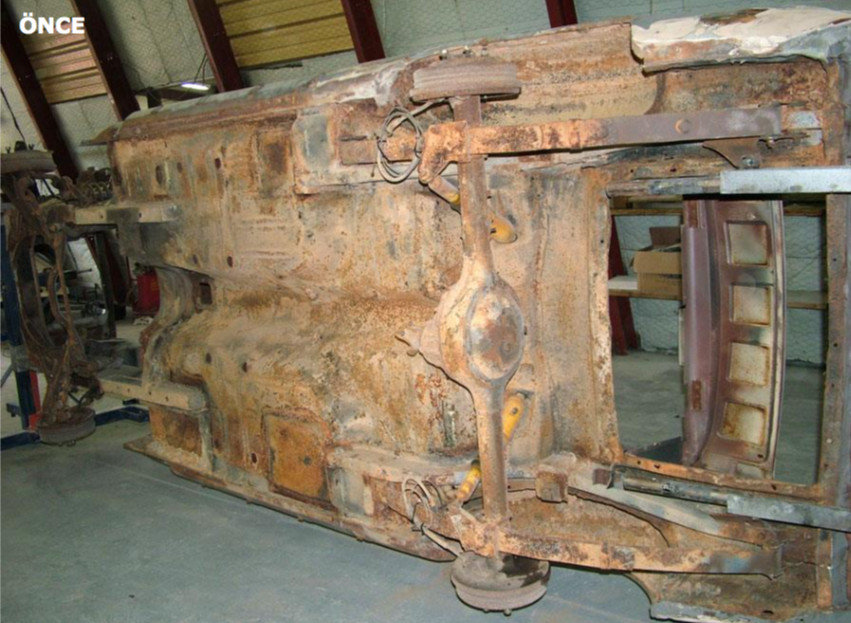 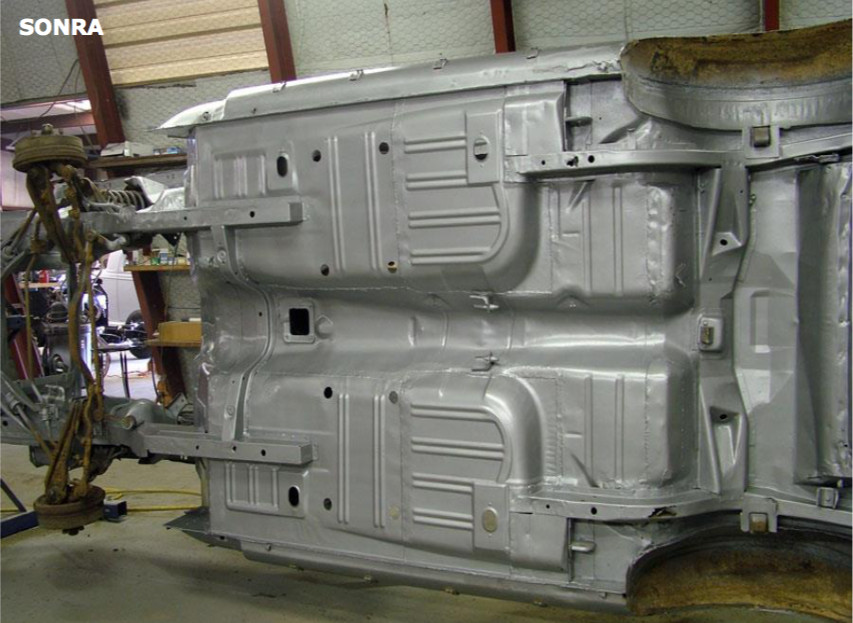 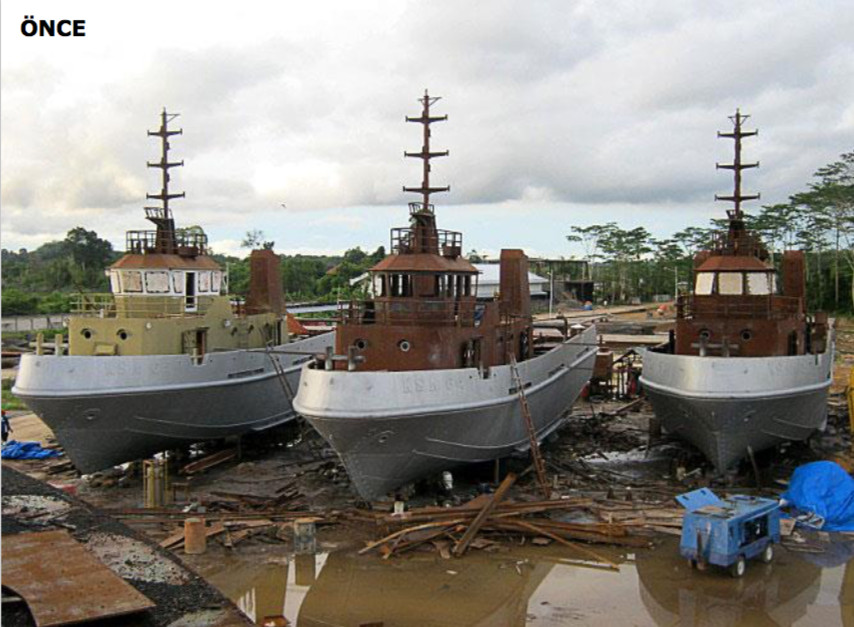 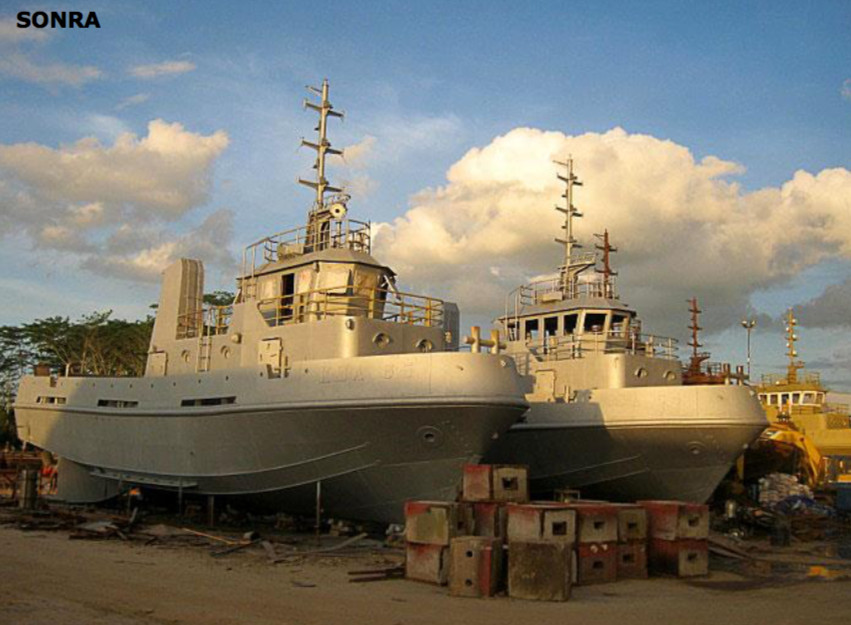 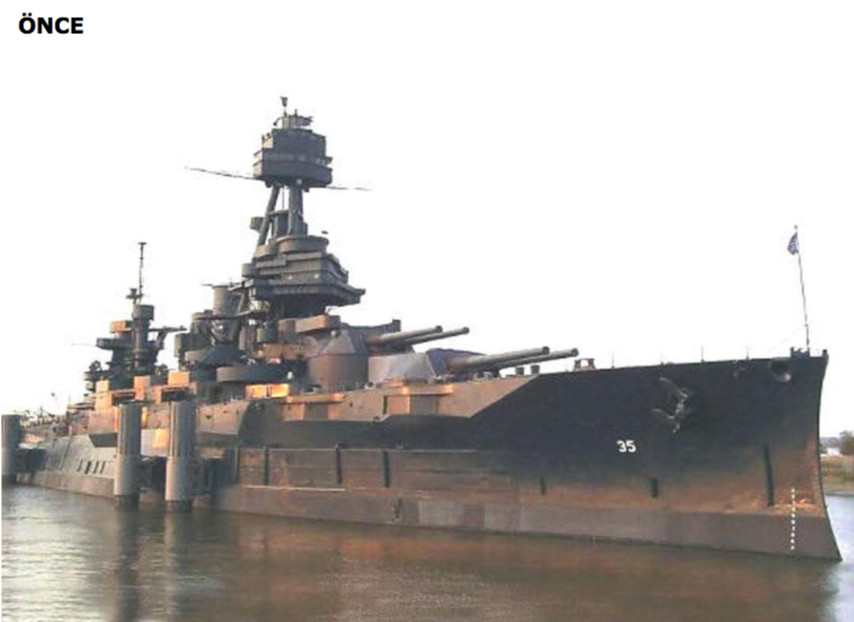 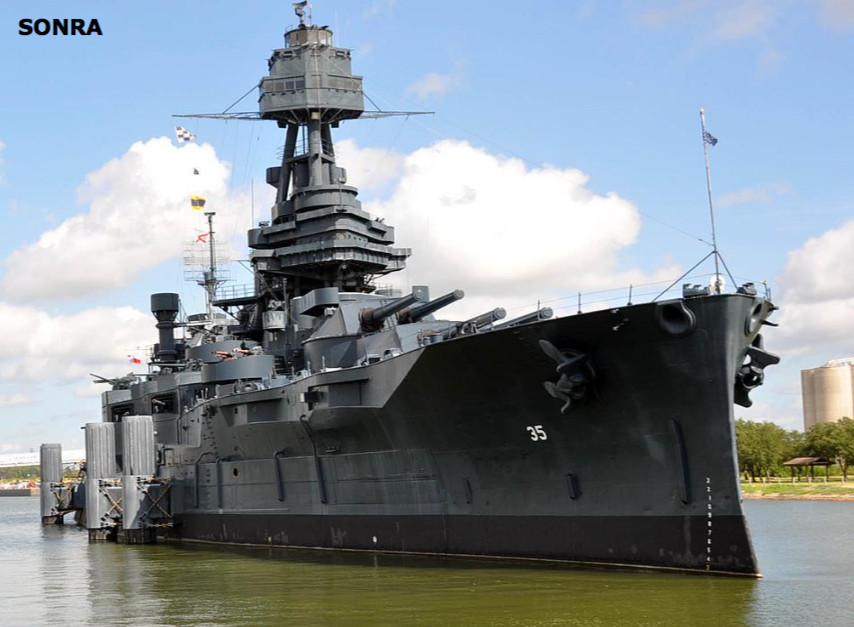 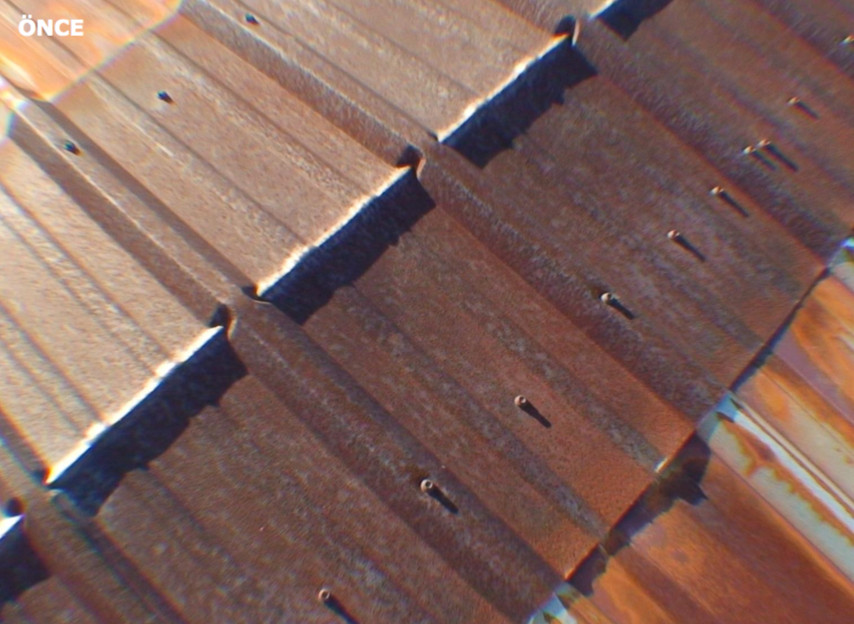 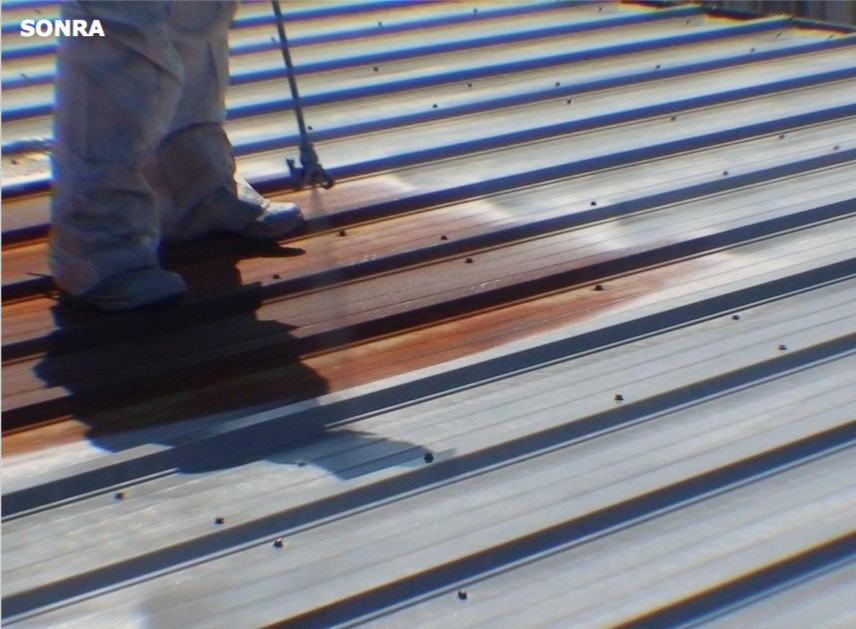 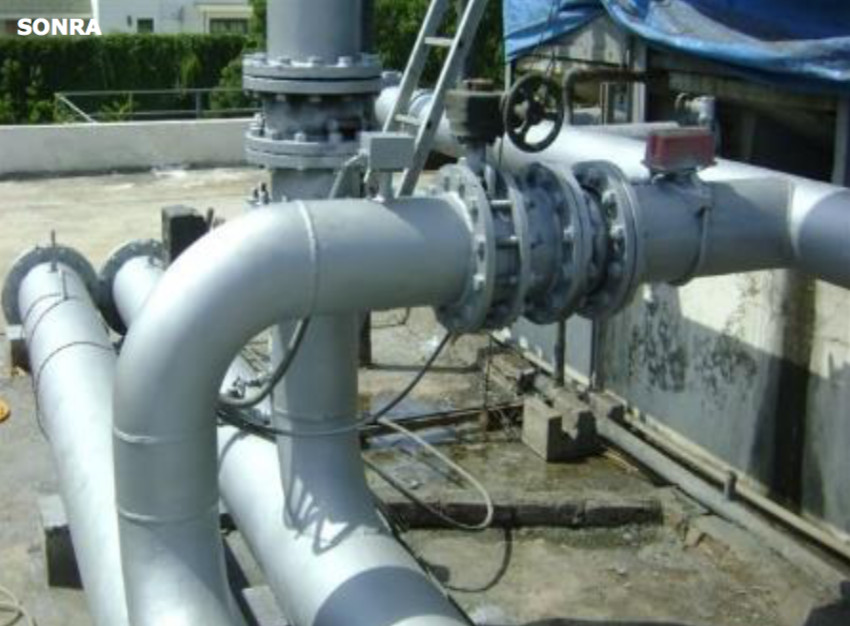 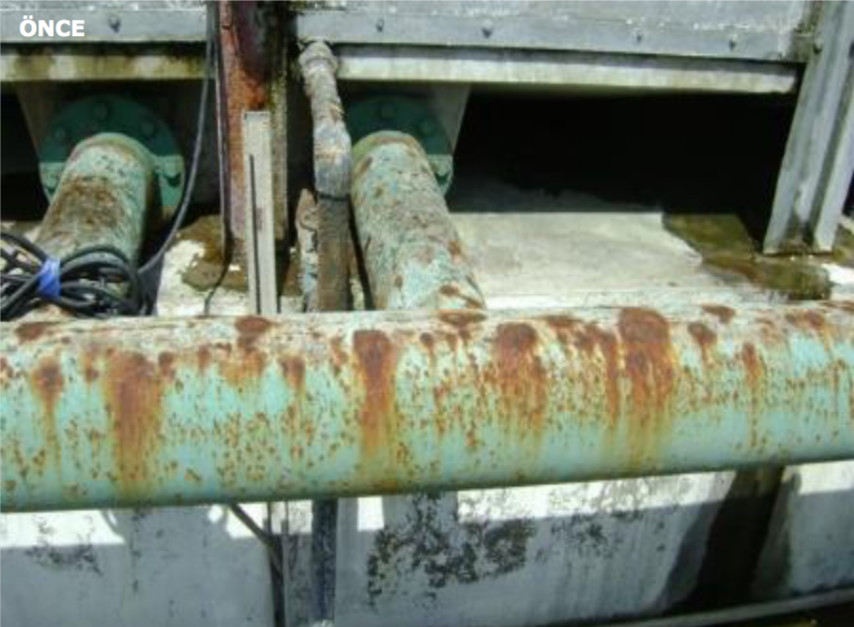 What is the recommended surface preparation technique?

Proper surface preparation will ensure optimum performance before RUST BULLET products are applied. The application surface must be dry. First of all, the old protective paint layers on the surface should be blasted with sandblasting, suitable hand tools or water jet.

If there is free corrosion, moisture, mildew, oily substances, wax, etc. should be cleaned. Furthermore, no detailed and complete corrosion cleaning is required.

What is the Recommended Surface Preparation Technique for Soluble Salt Pollution of Steel?

One of the reasons for premature protective coating problems is the invisible, undetectable soluble salt surface contaminants before the coating is applied. If soluble salts such as chloride or sulfate are present on the metal to be coated, this may cause premature damage to the protective coating.
These salts cannot be removed from the surface by mechanical means such as sandblasting. Cleaning with water jets is widely preferred because it is more economical. SThe speed, direction, and direction of the water spray effect alone are not sufficient to completely clean deep, narrow or microscopic cavities on the surface. The use of an acidic chemical provides a chemical solution for effective cleaning.

RUST BULLET METAL BLAST applies not only to soluble salts but also to other surfaces containing built-up pollution and impregnations.

What is the Recommended Surface Preparation Technique for Soluble Salt Pollution of Steel?

WHAT IS RUST BULLET METAL BLAST?